4 месяца назад на Yelp
This place wasn't too hard to find, it's located on top of the souvenir stores.  There's stairs in-between the stores to get to the top.  Walking up we were seated quite fast and looking around I really thought this was going to be great.  It was kind of romantic ambiance with the little candles on the tables, dim lights, looking off the balcony to the streets. Everything took a turn and I was highly disappointed on this last dinner night of our trip.  They were out of the two things we actually came here for, baked crab dip, and grilled octopus.  Drinks and food took forever, seemed as if they were backed up.  English was limited so I repeated the order and even pointed out what we wanted, but he ended up messing that up too. --Papas Bravas (5/5) - Highlight of our meal, potato's!  Fried cubed potatoes with spicy mayo drizzled on top.  Crispy and good!  My only complaint was it wasn't even hot when we got it. --Seared Tuna Tostada (2/5) - Nothing special about this dish, there was no flavor.  Tostada was hard, guacamole was just smeared center of it, topped off with 3 slices of tuna which was on the dry side for being "seared" and "fresh".  It was chewy. --Crispy Fish Taco (1/5) - You can get way better tacos elsewhere I swear.  This was the most amateur tacos I've had this whole trip.  One piece of skinny as* fish used with beer batter, topped with a sh*tload of cabbage.  There was no sauce, no flavor, lots of batter, and very dry.  Usually corn tacos come in 2, but they cut the top in half and our other taco was given the other half.  I wonder if they ran out of corn tortilla. --Crispy Shrimp Taco (1/5) - Same thing as the "crispy fish".  We actually ordered the "garlic shrimp", but somehow they managed to f*ck that up.  Just flavorless, dry, and lots of batter.  At least this came with 2 shrimps to fill up the taco. --Whole Fried Fish (2/5) - They didn't know what fish this was called in English but in Spanish it was "Pescado Del Dia".  It's a white fish that wasn't flakey but more chewy textured, the skin wasn't even crispy.  The fish itself had just a flavor of salt with some sort of thick sauce on the side that made it more salty.  Make sure you ask details about their "whole fish" before you order. When they said a whole fish they meant a filet of just one side.   This 1 filet was 350 pesos, sitting on a bed of shredded carrots. Enjoy. They top a lot of their dishes with shredded veggies to fill their dishes.  Most of the dishes we had, had carrots and I hate carrots.  I didn't think this place was worth the amount we spent.  Wish I could say the same as everyone else but sadly no. 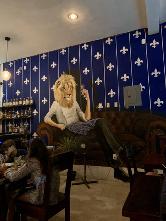